I've joined a diet cult. Yes, it's true. Despite reading Matt Fitzgerald's book (well, listening to it on Audible), and actually agreeing with it in many ways, I've chosen to follow a plan which fully meets the definition of a diet cult. (Per Matt Fitzgerald: It has a name, advocates claim it is the best diet, followers are emotionally attached to it, it demonizes certain foods, and it uses fear to recruit new converts (fear about the negative effects of certain foods)).

I'm okay with that.

Before I go into why, how, and what, I should probably explain what Whole 30 is.

Whole 30 is a food program that eliminates a few large categories of food for 30 days, essentially to reduce inflammation and the supposedly negative effects of these foods. It is not meant to be primarily a weight loss diet, but I suspect most of its followers do it to lose weight (like me). After the 30 days, when you feel awesome (presumably), you can slowly reintroduce the forbidden foods to see how they affect you.

The basic rules:
*No sugar or artificial sweeteners of any kind
*No alcohol of any kind
*No grains
*No legumes (except green beans and snow/snap peas)
*No dairy (except clarified butter)
*No carrageenan, MSG or sulfites
*No faux baked goods (even if made with Whole 30 approved ingredients)

All of the allowed foods are things I love to eat, and not hard to embrace. Giving up the forbidden foods is a little harder (though not as hard as you'd think). Sugar, obviously, is the hardest. I have a love for sweets, but I know not eating them is better for me. Alcohol is not a problem, though it's a little tricky weeding out hidden alcohol, like vanilla extract and Grey Poupon mustard (made with wine). Grains and legumes are not hard for me to avoid on a personal level, but it's hard for Rod to accept. I'm still trying to convince him that I don't mind if he makes beans or rice for himself. Dairy is doable, although I have a lot of yogurt in my fridge that I bought before this idea! The hardest part is giving up cream in my coffee. But I have switched to coconut milk, and that's going well.

For some reason, it has been easier for me to embrace a strict program like this than my usual moderation. Drawing the line between just a little (sweets and starches), and what I really want is just too nebulous. "Nothing" is mentally easier than "a little something." (Because I always want more.) Eliminating those foods entirely (for now) creates quite a large calorie deficit. Part of that is filled by eating more avocado, plus the coconut butter and other fats. The coconut milk is comparable to cream in my coffee. Still, I believe I am consuming a more managed number of calories, especially by cutting out those little nibbles like store samples, office treats, a little of this, a little of that.

One of the things that has happened is that I have been eating higher calorie meals in order to largely eliminate snacking. Snacking meaning noshing, really. I still have a couple extra mini meals to support my running. Generally, on weekdays, I have a small snack when I wake up, part of my breakfast as soon as I can after running, the rest of my breakfast later in the morning (mostly due to my work schedule, otherwise I'd have it all soon after running, probably), then lunch in early or mid-afternoon, possibly a small snack when I get home from work, and dinner later in the evening. (That probably sounds like eating all the time....) I have been eating sweet potatoes or potatoes almost every day, to make sure I have enough energy to work out.

I think that covers how and what, now why?

Well, I already said that "why" I picked Whole 30 was because eliminating foods that are triggers for me seems easier to manage. Why I'm doing it at all is because I really want to lose a few pounds before ratcheting up marathon training in March. Moderation efforts over the last year have not resulted in weight loss. In fact, I think I weigh at least five pounds more than a year ago, and at least ten more than I would like for training purposes. Beginning with the marathon taper last May, then my running injury in the summer (though I cross trained like a mad woman), and then the holidays, I just have not been able to rein myself in.

I'm hoping this will give me a jump start. Plus I'll have the benefit of weaning myself from sweets and seriously moderating other carbs. I'll probably have to give up the coconut butter when rice and beans come back.

By the way, I did read the Whole 30 book, It Starts with Food, and I'll admit that I really disagree with a lot of the philosophies and science/nutrition theories. They may be right or wrong. But still, in practice, I think the 30 day program is something that will work for me.

One of the non-food rules is that you're not supposed to weigh yourself (except once at the beginning and after you're done). I may not be following that one strictly, though I'm not doing it daily or anything. I think I've lost a pound or two. I really do feel less bloated and wobbly (although I will always have far more wobbly bits than Bridget Jones ever had).

After today I will have been doing this strictly for a week. (The week before I was tapering off sugar and carbs, though that all went out the window on Super Bowl Sunday.) I have not had any major or intentional slips. The only flaws have been that the first coconut milk I bought had impermissible sulfites (I think), and one day I had pho (no noodles), but the broth may have included non-compliant fish sauce and I added a few drops of sriracha (also apparently non-compliant).

On Friday I bought a Costco cake for a work event. I cut and served the entire cake without eating a bite or licking a smear of frosting from my finger. Mental win.

Apparently a lot of people feel sick and weak in the first few days, presumably as the toxins depart their bodies, but that hasn't been an issue for me. Maybe it's because this isn't a radical change for me. I'm used to the good foods and I don't really eat a lot of junky food. I'm almost 25% done and feeling strong!

Hi Kristin! Just wanted to say thanks for your comment on my blog - that is a great idea, carrying an expired ID with you - I also worry about losing my current ID or forgetting to put it back in my wallet... 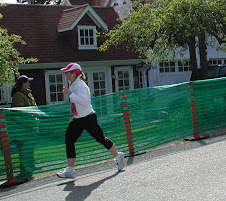